The Computational Atomic Structure research group closely cooperates with scientists world-wide. Currently the research group has developed a fruitful cooperation with researchers of National Institute of Standards and Technology (the USA) in the field of atom spectroscopy. The investigation into fusion of the matter is done in collaboration with Japanese researchers of National Institute for Fusion Science (Japan) and Kyushu University (Japan) and into modelling of electromagnetic radiation sources with researchers of Tohoku University (Japan).

In the field of software package development it is collaborated with researchers of The University of British Columbia (Canada). The General Relativistic Atomic Structure Package (GRASP) is listed at AMOS Gateway – A Portal for Research and Education in Atomic, Molecular, and Optical Science.

Much of theoretical research is done with researchers from different countries of the European Union. One of the key partners in high accuracy calculations of isoelectronic sequences are Malmö University researchers.

Collaboration is implemented through frequent long-term visits, mutual projects and joint publications as well as through participation in meetings with members of international CompAS group (https://ddwap.mah.se/tsjoek/compas/index.php, CompAS and The international collaboration on Computation Atomic Structure). 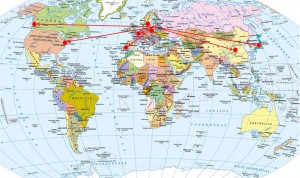